CeCe died peacefully on 5/25/17. As many of you know, her loving spouse Astrid said that shortly before she died, CeCe began humming to herself. Music was extremely important in her life and I like to think that she died transported by the music she so loved.

The following is her obituary from The Daily Hampshire Gazette. Our condolences to her beloved spouse Astrid Lindstrom. May her memory be a blessing. 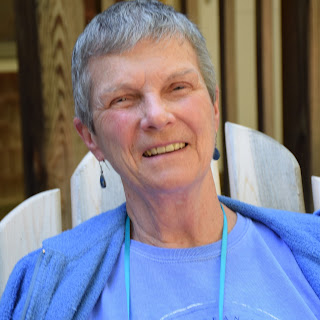 FLORENCE –  Cecelia Marie "Cece" (Frack) Scott died Thursday, May 25, 2017, of ovarian cancer at her home in Florence, She was 78.
Born March 25, 1939, in Easton, Pennsylvania, she is the daughter of the late Edna Raffetto Frack and the late William Frack. Cece is survived by her wife Astrid Lindstrom of Florence; Cece's daughter Heather Scott of Eugene, Oregon; her son Jeffrey Scott and his wife Sharon Yates of Hoboken, New Jersey; step-daughter Anna Leavitt of Arvada, Colorado; step-son Benjamin Leavitt and his wife Jacquelyn Murphy of Aurora, Colorado; brother William Frack, Jr., of Key Largo, Florida; nephew William Frack, III, of Los Angeles, California; niece Lisa Frack of Portland, Oregon; and grandchildren Tiernan, Abigail, Laura, and Zoe.
Cece was educated at Saint Mary's School in Peekskill, New York; at Mount Holyoke College, where she earned a bachelors degree in religion; at Yale University, where she earned a master of arts in divinity; and at Smith College, where she earned a masters in social work. When at Yale, she did field work in local churches and at a neighborhood center for preteen girls from public housing. At age 24, she moved to Washington, D.C., to work as an assistant minister in a small church. She participated in the march on Washington in 1963, which solidified her commitment to social and political activism. Frustrated by the church's limited expectations of her as a woman, she left the ministry after two years and joined the federal government in the war on poverty. For the next seven years, she worked for the Community Action Program. Cece married Stuart Scott and began her family during this time.
In 1976, Cece began four years of work with the Environmental Protection Agency, and in 1981 she was hired to manage the Federal Women's Program at the Environmental Protection Agency. Here she assumed responsibility for the agency's Affirmative Action Program. In the midst of her work to empower women, Cece came out as a lesbian and then went to Smith College to prepare for her third career. She wrote in an essay for her application to the Smith School of Social Work that her life was "a journey of coming out by going in." Soon she was facilitating support groups for women in heterosexual marriages coming out as lesbians.
Cece's third career officially began as a psychotherapist at the Carson Center in Westfield. It was when Cece was working at the Carson Center that she met and fell in love with her wife Astrid, then from Natick. They were married in Abbey Chapel at Mount Holyoke College in 2009. When Cece resigned from the Carson Center, she established a private practice in Northampton and in West Springfield as a psychotherapist. During her marriage to Astrid, Cece sang in the Hampshire Choral Society, helped organize alumnae reunions at Mount Holyoke College, baked cookies for grandchildren, and took dog walks in the woods every weekend.
Visitation for Cece will be Tuesday, May 30, from 4 to 7 p.m. at the Ahearn Funeral Home, 783 Bridge Road, Northampton. Her memorial service will be Sunday, June 25, at 2 p.m. at Abbey Chapel at Mount Holyoke College in South Hadley, with a reception to follow in the Morrison Room at the Willits-Hallowell Conference Center. Parking will be available at the Village Commons.
Cece has asked that family, friends, and colleagues celebrate her life by wearing bright colors, especially purple. Cece's wife, children, grandchildren, and niece will scatter her ashes in June in Cece and Astrid's favorite vacation spot, Ogunquit, Maine.
In lieu of flowers, donations may be made to Cancer Connection, VNA Hospice of Cooley Dickinson, Hampshire Choral Society, and Mount Holyoke College.
To sign a Guest Book, express condolences, share memories and read other obituaries, go to legacy.com/obituaries/gazettenet.
Posted by Margaret Mastrangelo, M.S., FNP at 10:35:00 AM No comments:

Great Wkend in Stowe for the Wkend of Hope

Well folks, another great year at the Stowe Weekend of Hope! On Friday, our TTT group did a presentation entitled, "Life is Spectacular! One Day at a Time! Living Well With Ovarian Cancer in the Side Car of Life."

Kathy, Marilyn, Batoul, Pat and Tom joined Anne is discussing the lessons learned in their journeys as care givers and survivors. It was of course, very well received.

We attended a variety of workshops, ate well, and some of us attended a guided lantern tour of Stowe, covering the local history and ghost stories/legends. Of course Saturday night was topped off by a get-together of wine, cheese and fruit where we all got a chance to hang around and schmooze.

Thank you to the town of Stowe for hosting us and a very special thank-you to Anne and Dick for all the hard work to make our group so welcomed and well looked after.

And now, for some photos! 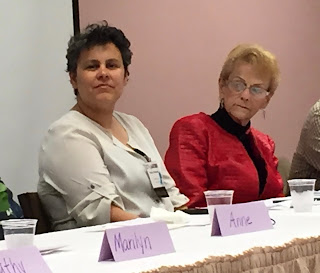 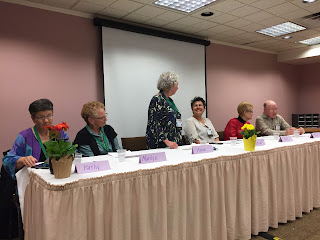 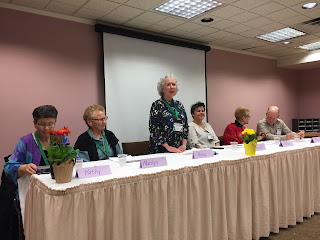 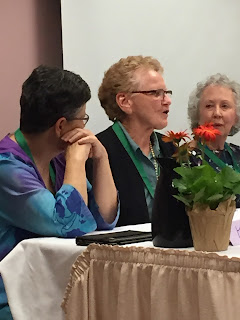 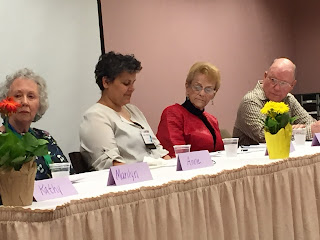 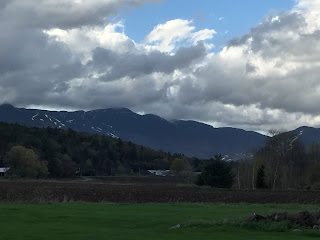 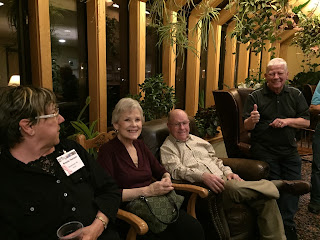 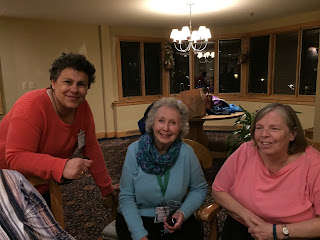 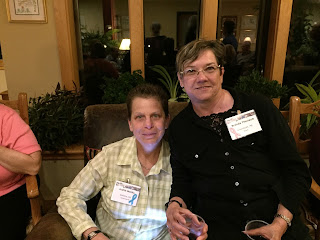 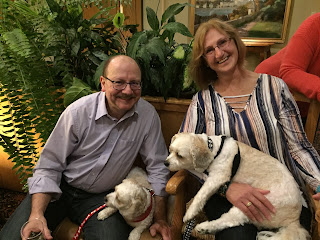 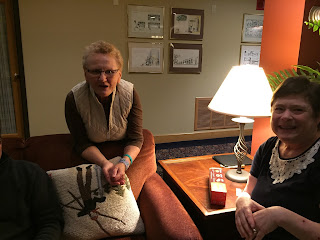 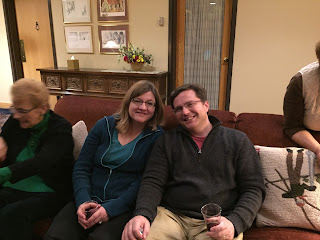 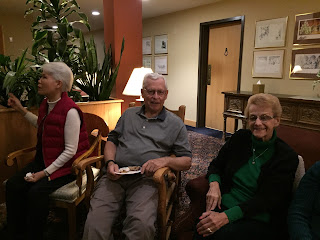 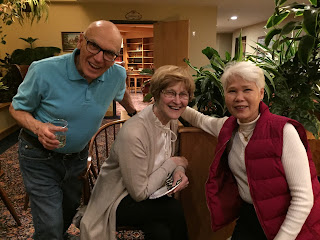 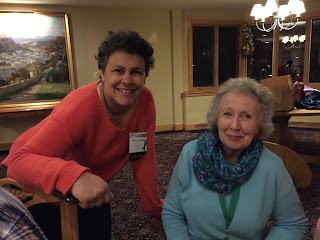 I am saddened to report the death of Felicia who attended TTT 2015 for the first time. She was unable to come last year.

As her obituary shows, she was an amazing woman. May her memory be a blessing.


Jocelyn Felicia Moreland Robinson died peacefully at home April 15, 2017, after a long bout with ovarian cancer. She was surrounded by her husband, David E. Robinson, close friends and family.
She was the daughter of William D. Moreland Jr. and Jocelyn Felicia Kingsbury Moreland. Felicia was born on Dec. 29, 1955, in Aruba, Netherlands Antilles, where her father was consul general for the United States. By the time she was 6, Felicia was already a citizen of the world, having lived in Aruba, Ecuador and Washington, D.C.; this later inspired her to travel to Lebanon (a trip Felicia took with a friend when she was just 14), England, France, Peru (where she visited Machu Picchu), Ecuador, Denmark, the South Pacific, Germany, Austria, many Caribbean islands and Russia, the birthplace of her adopted daughter, Tonya E. Robinson.
When not roaming the world, Felicia racked up an impressive number of academic degrees. A graduate of The Thomas School (established by her maternal great aunt, Mabel Thomas), in Rowayton, Conn., Felicia earned degrees from Brown University (majoring in medieval French literature), Boston University School of Nursing and Yale University (a master’s degree in midwifery) and advanced midwifery studies in London, England. With her command of French she was in great demand as a midwife in the Haitian community of Boston.Her home base was, for many years, her rambling home Graycote, in Rowayton, Conn., on land sloping down to Wilson Cove that had belonged to her family since just after the U.S. Civil War. There Felicia gained her love of sailing — a lifelong passion. There also Felicia, at age 16, established the Graycote Summer Camp, which she ran from 1972 until she graduated from Brown; the parents of small children entrusted those precious beings to a teenaged girl because … she was Felicia.
She lived in Cambridge, Mass., for many years before her marriage. Before settling in Keene, together she and David lived in Burlington, Vt.; Hollis, Amherst and Nashua; and Lunenburg, Nova Scotia. She shared every home with her beloved pets: dogs, birds and cats. Felicia loved dance parties, was mad about The Beatles and Calypso, and laughing long and hard. A walk on the beach was as much a joy to er as a good piece of chocolate.
From the Caribbean Sea to Lake Spofford, nothing was sweeter than being by the water. She loved with an open heart and an open mind — and she was loved right back, as the outpouring of love on her Facebook page attests.After earlier service at Boston City Hospital ER, Felicia was a certified nurse midwife for many years; she was the director of the Cambridge (Mass.) Midwifery Clinic and with others founded Full Circle Midwifery in Nashua. She was later a nurse manager at Valley Regional Hospital in Claremont and at Cheshire Medical Center.
She was a member of Keene Unitarian Universalist Church. Felicia was steadfast in her dedication to family and commitment to her children, William and Tonya, whom she loved beyond measure. In addition to her husband and children, Felicia is survived by her brothers, Jonathan T. Moreland of Vancouver, Wash., and Daniel D. Moreland of Lunenburg, Nova Scotia, Canada; her sister-friends, Jean Kelley of Cambridge, Mass., and Elizabeth Hilts of Norwalk, Conn.
A memorial service for Felicia will be held at Keene Unitarian Universalist Church on June 10, 2017, at 3 p.m.
In lieu of flowers, the family asks that donations be made to Home Healthcare Hospice and Community Services, 312 Marlborough St., Keene.