Anne and Betsy both alerted me to this article published in the Dana Farber newsletter. I've reposted the article in full below.


A team of researchers led by Dana-Farber Cancer Institute have identified 34 new genes that are associated with an increased risk for developing earliest-stage ovarian cancer. The findings, published in the journal Nature Genetics, will both help identify women who are at highest risk of developing ovarian cancer, and pave the way for identifying new therapies that can target these specific genes.
The study was co-led by Alexander Gusev, PhD , a cancer genetics researcher in the Division of Population Sciences at Dana-Farber, Simon Gayther, PhD, director of the Center for Bioinformatics and Functional Genomics at Cedars-Sinai, Bogdan Pasaniuc, PhD, associate professor of pathology and laboratory medicine at the David Geffen School of Medicine at UCLA.
Currently, there are no effective screening tests for ovarian cancer and the disease is notorious for presenting in later stages when survival rates are poor. However, if ovarian cancer is caught early, survival rates increase dramatically, underscoring the need to identify those who may be at risk for developing the disease.
The study by Gusev and colleagues builds on previous research of large-scale genetic data gathered over more than a decade by the Ovarian Cancer Association Consortium. Those researchers compared the genetic profiles of about 25,000 women with ovarian cancer and 45,000 women without the disease. The investigators found more than 30 regions in the genome that are associated with ovarian cancer.
"One novelty of this work is that we looked at risk genetic variants that operate through alternative splicing rather than just the total abundance of a gene, which led us to genes we would not have otherwise identified,” explained Gusev. “Beyond a better understanding, if these risk mechanisms really operate through splicing, that also opens up new drug-target opportunities,".
“Now that we’ve identified all these regions in the genome that increase the risk for ovarian cancer, we're at the stage where we are mapping the genes of these risk regions,” Pasaniuc said. “Ultimately, that will lead to better prediction, and that will lead to better stratification of women of different risk categories.”
To pinpoint the genes, the researchers analyzed patient data to try to find mutations that explain the patient status.
The idea of combing through large amounts of data to establish which specific genes drive ovarian cancer development may seem simple, but there are thousands of possible gene targets that can be affected by numerous mechanisms, so putting the pieces together is a huge computational and statistical effort.
The study discovered that in women at greatest risk of ovarian cancer because of their genetic blueprint, “there is an interplay between their genetics and specific genes that drive the very earliest stages of cancer development,” said Gayther, also co-director of the Applied Genomics, Computation and Translational Core at Cedars-Sinai.
“The main challenge has to do with the number of genes that are in one region of the genome,” Pasaniuc said. “Whenever you inherit a piece of DNA from your parents, you don't inherit just every base pair of the genome, you inherit big chunks. That means that if you inherit a gene mutation in a given region, you inherit the entire region, which can carry 10 to 20 genes at a time. This makes it very hard to pinpoint specific genes from specific regions.”
To help identify the genes in these particular regions, the team compared the large-scale genetic data from the Ovarian Cancer Association Consortium with a different data type that shows the mutations that disrupt the genes in ovarian and other tissues. By putting these two pieces of information together, the researchers were able to distinguish what genes in the genomes are actually the risk genes. Through this computational technique, the team identified 34 genes that are associated with an increased risk for developing ovarian cancer.
The study was funded by National Institutes of Health awards, including a R21 award under grant number CA22007801, a U19 award under grant number CA207456, RO1 awards under grant numberss CA211707,  CA207456, CA204954, CA227237,  and in part by the Ovarian cancer Research Fund Alliance Program, among additional NIH and other awards.
Posted by Margaret Mastrangelo, M.S., FNP at 8:04:00 AM No comments:

Join Beth Popp, MD, FACP from Mount Sinai, NY from 6-7pm on May 22 and bring your questions. She will be leading a discussion on the benefits of palliative care.

Palliative care is specialized medical care focused on relieving the symptoms and stress of serious illness. It’s appropriate at any age and any stage, and can be paired with curative treatment. The goal is to improve quality of life.

Teal on Wheels: Our Own Donna Wiegle Is Raising Awareness for OC 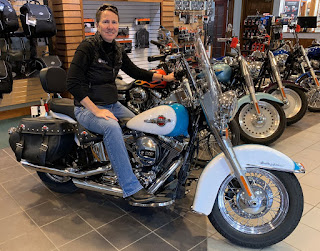 Hats off to Donna!! Those of us who know her, know that what she sets her mind to, she does. Remember how she decided there was a need on her island for a health care clinic? She started one - complete with state of the art equipment that she managed to get with the help of donors and fund raising.

When I spoke to her not even two weeks ago, she floated the idea of traveling across country on a teal motorcycle to raise awareness about ovarian cancer and raise funds for two important organizations dear to her: Turning the Tide, and the Ovarian Cancer Research Alliance.

So it's no surprise that she has now officially kicked off her campaign to raise $50,000. As she puts it, she's on an "accelerated life plan" meaning when she thinks something is important, she's going to do it. Not next month, not next year. NOW. Since September is Ovarian Cancer Awareness Month, she will spend September driving across country, stopping along the way to talk about the signs and symptoms of ovarian cancer, raising money along the way.

How can you help? By going to her GoFundMe page, Teal on Wheels and making a contribution in ANY amount. It's about the power of collective giving - and NO donation is too small.  And while you're on that page, consider linking to FB - it can really boost donations.

I am proud to be on her team of volunteers and I hope that you'll join us in making this happen.
Posted by Margaret Mastrangelo, M.S., FNP at 9:10:00 PM No comments:

As our TTT sisters know, Mary attended the retreats for several years including in 2018. Not only did I have the privilege to know her through TTT but she was also a member of my local support group at Cancer Connection. 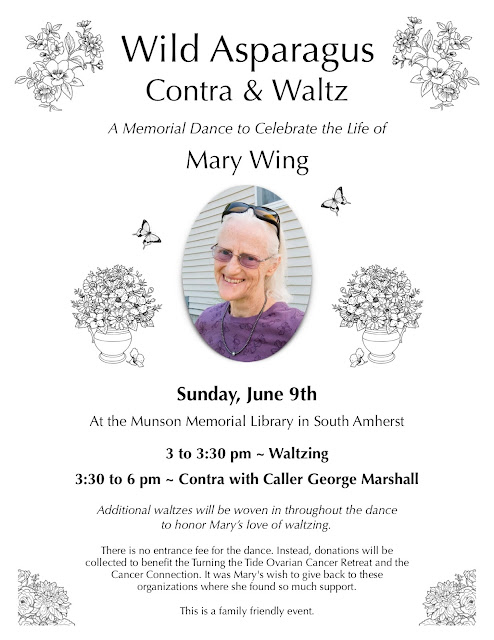 Wow - what a great weekend we are all having so far! Our group arrived on Thursday and Friday and everyone brought food - lots and lots of homemade casseroles, breads and lunch produce, delicious homemade humus, fresh fruit and baked goods and plenty of nosh!

Today, our own Anne, Dick, Marilyn and Cathy led a gynecological group for caregivers and their partners. We listened to each other's stories in one group while partners/spouses met in another.

I met a woman today in the gynecological group who has come for the first time. Shy and nervous, she admitted to me during the breakout session led by Anne, Dick, Marilyn and Cathy that this was exactly what she was hoping to find this weekend. My only problem was that there wasn't enough time to continue to talk with all the wonderful women I met. We were able to talk to many of them about our TTT retreat and hopefully we'll see some more new faces there this year.

Yesterday we heard from the VT governor, Phil Scott, who talked about his aunt co-founding an organization that awards small grants to singles and families struggling with the financial burdens of cancer. It awarded over a million dollars last year to local residents - that's the power of collective giving and community. And really, isn't that the power that Anne harnessed back in 2009 when she created TTT? It starts with the vision of one person - just like Stowe Weekend of Hope.

Thank you Stowe, thank you Anne, and thanks to all my sisters and their partners for this gift of renewal and connection. 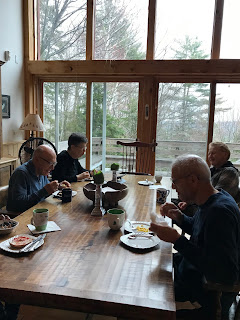 Good morning Stowe visitors and many thanks to our gracious hosts who have provided us with this magnificent home four our group to stay.

The theme for today is movement and the offerings for participants include yoga, aqua aerobics and a guided walk in the woods.

What matters to me is the wonderful camaraderie that I find when getting together with our TTT Sisters. Some of our partners/spouses are able to join us and that’s always an added bonus.

For a list of today’s offerings, follow this link. I’ll be posting throughout the weekend so stay tuned!
Posted by Margaret Mastrangelo, M.S., FNP at 8:26:00 AM No comments: