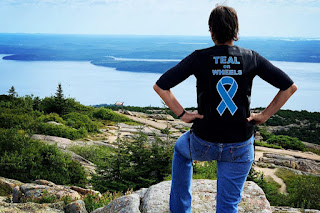 Just 9 days left until I depart for Coos Bay, Oregon. Last I heard my bike had made it as far as Columbus, OH, expecting to be delivered at Highway 101 Harley Davidson on August 23. I arrive on August 27 and if all goes well on my travels across the country I will begin my ride the following day.My fundraising is going amazingly well!!! I am just $91 short of $28,000!!!! It is unbelievable how generous both people I know, and those I don't know have been! It's so heartwarming to have so many people supporting me and my mission.Speaking of support, you can see from my picture here that I am sporting my new black leather vest with my TEAL on WHEELS patch on the back. A lovely lady from Cherryfield, Downeast Maine, sewed the patch on for me and would't accept any payment! I had the same thing happen when Les Foss inspected my teal and white bike...no money exchanged hands. Also, when I got the bike serviced by Stanley Gardner at Gardner Racing Concepts...Stanley provided all the parts and labor free of charge to support me.  It's crunch time now and I still have a long list of things to do, but each day I am making progress towards my departure date. I am excited, nervous, and just a little bit scared! I know everything will work out just fine. I packed 1,000 ovarian cancer symptoms cards rubberbanded in packs of 25, then packed in ziplock bags in my saddlebags of my bike. I hope to distribute every last one on my way across the United States.If you want to follow my trip, go to tealonwheels.org and subscribe to my blog on the bottom of the home page. I will be posting frequently from the road.Thank you for all of your support. It means the world to me!

To donate to Donna's campaign to raise awareness about the signs and symptoms of ovarian cancer, go to this link: https://www.gofundme.com/f/teal-on-wheels-ovarian-cancer-awareness-tour

Register for the Ovations 13th Annual Learning for Living Symposium on Sept. 14, 2019

This is always such a great event that is free to women and their guests. The day begins with breakfast at 8 a.m. followed by presentations by leading ovarian cancer experts and then lunch. Parking is at a reduced rate.

To find out more about this important event and to register, follow this link
Posted by Margaret Mastrangelo, M.S., FNP at 3:30:00 PM No comments:

Nirapamib for Maintenance Therapy: New Evidence that All OC Women Would Benefit

When I was diagnosed 4 years ago options for maintenance therapy were generally limited to women who were BRCA+.  Not so any more with this particular PARP. Avastin was also available but the data was not strong enough to support me being on it, according to my surgeon. I was Stage 3C and the plan was for me to undergo surgery followed by IV/IP treatment, all of which I completed.

Maintenance therapy is becoming more standard however and so, four years out, there is  nothing in the article to suggest that women like me begin maintenance.

This article by Dr. Oliver Dorigo from Stanford University Medical Center, was found on Survivornet.com. Here's what Dr. Dorigo has to say about Nirapamib:


After undergoing surgery and getting chemotherapy for ovarian cancer, you may want to consider taking a relatively new kind of drug called a PARP inhibitor, which helps to kill off cancer cells. “PARPs” are somewhat recent entrants into ovarian cancer treatments and are getting lots of attention from oncologists.
What are PARPs For?
While PARP inhibitors were originally approved to treat cancer recurrence in BRCA mutated patients with at least 2 or 3 prior lines of chemotherapy, there is compelling new evidence that all ovarian cancer patients, regardless of BRCA mutation, may want to consider PARP inhibitors for maintenance if they’re responding well to chemotherapy (including a platinum drug such as Carboplatin).
We spoke to Dr. Oliver Dorigo, a Gynecologic Oncologist at Stanford Medical School, about some of the details:
Niraparib as late-stage therapy for women without BRCA mutations:
Niraparib, also known as Zejula, is one of the three major PARP inhibitors, and can be used in patients without BRCA mutations (about 80% of women). According to Dr. Dorigo, “We have trials that have shown that Niraparib in any patient with [ovarian cancer] can be beneficial in the maintenance setting…independent of a BRCA mutation.” Tumor cells with BRCA mutations have problems repairing DNA already, and the PARP inhibitors make these cells even less functional, causing cancer cells to die. Nonetheless, Niraparib has been shown to be effective in patients without this mutation. The other two PARP inhibitors, Olaparib and Rucaparib, are also approved to be used in this setting with the same indications.
The drug is currently approved for use as maintenance therapy for advanced/recurrentovarian cancer patients, regardless of whether they have BRCA mutation. These patients have undergone initial surgery and multiple rounds of chemotherapy, but their cancer continues to come back. In fact, in one trial known as the NOVA trial, patients without BRCA mutation who had already undergone several rounds of chemotherapy lived more than twice as long after taking Niraparib as those who did not. Niraparib, like other PARP inhibitors, is used to block the ability of tumor cells to repair DNA, thus eventually killing them.
Niraparib as an ‘up-front’ therapy for women without BRCA mutations:
Niraparib is also being tested in a clinical trial for use after just the first line of chemotherapy. Doctors refer to PARP inhibitors used at this early stage in the treatment course as the drug being given ‘up-front.’ According to Dr. Dorigo, the trial, called the PRIMA trial, is looking at whether Niraparib can be used in ovarian cancer patients directly after the first round of chemotherapy following surgery, regardless of whether they have a BRCA mutation. Although the results have not been presented or published yet, Dorigo and other specialists believe that there is hope for the use of this drug in this setting.

The following is a transcript by Dr. Michael Birrer, taken from Survivornet.com. Dr. Birrer, formerly medical director of gyn/onc and the gyn/onc research program at MGH, is now at the University of Alabama.

How do you decide what patients should get bevacizumab versus PARP? And that's really the million dollar question, and it's a very unique question.
For those of us treating ovarian cancer patients, for almost 20 years, all we had was Carboplatin and Taxol.
And we would argue about what taxane to use, or we might argue about IP versus IV.
But there weren't really earth-shattering questions.
Now we have choices, so it's terrific for the patients.
But nevertheless, one needs to make that choice.
And I think that the field is migrating that if patients have either germline or somatic BRCA1 gene mutations, that when possible, they should get a PARP inhibitor.
However, you need to recognize you're looking at about 20% of the patient population.
The other 80%, you need options.
And there is where one might consider bevacizumab.
Now does everybody get bev? Probably not, if you have certainly tumor infiltrating the bowel or other contraindications that might be risky.
But again, that's a small patient population.
So that's the way most of us are dividing this down.
Genetic abnormalities giving rise to ovarian cancer-- BRCA1, BRCA2-- will get PARP inhibitor maintenance.
And if they don't, they should be offered bevacizumab.
What's the next step? And would there be an option to give both? The answer is, absolutely.
So there are several ongoing trials looking at the combination of olaparib with bevacizumab, so we'll know the answer to that.
If I were to give an educated guess, I would say we'll be treating with both agents in the near future.
Posted by Margaret Mastrangelo, M.S., FNP at 8:21:00 AM No comments: