Ovations for the Cure Symposium 2017

For those who attended last year, you'll remember that the symposium features leading doctors, oncologists and researchers who study the field of ovarian cancer.

This is the 11th year this symposium has been offered. It is free of charge to "educate and update ovarian cancer patients and survivors at no cost to them, on the latest ovarian cancer research, treatment and therapies."

To find out more about this great event, follow this link to register for this free event. Be sure to sign up early!

Get Ready for the Turning-the-Tide 2017 Retreat: Oct. 4-8th
The TTT camp is a retreat in New England for Women Living with Ovarian Cancer. (It begins in the afternoon on Wednesday, October 4. Please arrive between 1 pm and 3 p.m. Closing will be on Sunday, October 8 at 9:30 a.m.)
Who is the Retreat for?
For women currently undergoing or having completed treatment for ovarian cancer. Thirty-five women will be accepted, with registration priority given to women from New England.
How do I register?
Registration opens August 1, 2017 and people will be accepted on a first-come basis. Each participant is asked to pay $100 toward the retreat cost of $400/person. Scholarships are available for those who need them. We want you to come!
What are the facilities like?
Most attendees will stay at the Kennedy Learning Center building at Camp Kieve. You will share a room with one other woman. Each room has two twin beds and a bathroom, and has direct access to the outdoors and interior hallway. The Kennedy Center also has outdoor deck seating, an enclosed porch, and an outdoor hot tub nearby. Meals and most activities take place in the large common rooms of the Center. The lakefront and its activities are also conveniently near.
For more information and photos of the facilities, you can look at www.kieve.org/KLC. Please do not contact Camp Kieve directly.
What will we be doing?
Turning the Tide 2017 Retreat will combine recreationi and relaxation through a variety of indoor and outdoor activities, art projects, entertainment, and free time. Many wonerful things are offered throughout the time, and participants are encouraged to take part in as many of them as they are up to - but everything at camp is optional. You are free to rest in your room or chat with a anew friend anytime. There will be a variety of activities to choose from each day. Activities may include kayaking, canoeing, rock wall climbing, hiking, zipline, creative projects, yoga, Qigong, cooking classes, dancing and singing. There will be a licensed social worker and spiritual director available for private and group discussion.
What about meals?
Meals will be nutritious, delicious, and as much as possible organic, served in a family atmosphere. A variety of snacks and beverages are also available twenty-four hours a day. For those who require vegetarian or other dietary alternatives, we ask you to outline those needs in detail on your registration form. We will do our best to accommodate specific dietary needs. Anne will contact you in early September to confirm any special needs.
Medical needs
Attendees must be able to care for their own medical needs while at the retreat. A nurse will be available for minor first aid and supportive consultation if emergency assistance is required. Miles Memorial Hospital and Rite-Aid Pharmacy are located in Damariscotta, 15 minutes from Camp Kieve. Please return the completed medical information form with your applicatioin.
To view pictures from the 2012, 2013, 2014, 2015 and 2016 retreats, go to: www.turningthetideovarianretreat.com or on Facebook: Turning the Tide ovarian retreat.
If your plans change after you are registered, please contact us as soon as possible, so that someone else may be able to attend.
Contact Anne Tonachel at annert@gmail.com or 617-388-1851, or Sue Joanis at susan.joanis394@gmail.com or 508-596-4349.
The TTT Retreats are made possible through the sponsorship of TESARO and generous grants from The Patricia Cronin Foundation, The We Beat Cancer Foundation, The Chrystine M. Sullivan Fund, the kindness of the Kennedy Family and staff of Camp Kieve, Nobleboro, Maine, and many other generous friends of Turning-the-Tide.
PLEASE: Refer any questions about the retreat to Anne or Sue; do NOT attempt to contact Camp Kieve about the retreat.
Turning-the-Tide Ovarian Retreat is a tax-exempt non-profit organization under the Beth C. Wright Cancer Center, Ellsworth, ME. Michael Reisman, Director.
"Since attending this wonderful retreat, I believe that I am no longer alone."
"The best thing I have done for myself, ever!"
"The love and support surrounding those five days in Maine were truly unconditional."

"‘This is not the end’: Using immunotherapy and a genetic glitch to give cancer patients hope"


‘This is not the end’: Using immunotherapy and a genetic glitch to give cancer patients hope


The oncologist was blunt: Stefanie Joho’s colon cancer was raging out of control and there was nothing more she could do. Flanked by her parents and sister, the 23-year-old felt something wet on her shoulder. She looked up to see her father weeping.
“I felt dead inside, utterly demoralized, ready to be done,” Joho remembers.
But her younger sister couldn’t accept that. When the family got back to Joho’s apartment in New York’s Flatiron district, Jess opened her laptop and began searching frantically for clinical trials, using medical words she’d heard but not fully understood. An hour later, she came into her sister’s room and showed her what she’d found. “I’m not letting you give up,” she told Stefanie. “This is not the end.”

What a beautiful Celebration of Life that Larry and his family had for Catherine on Saturday June 10th. Catherine died earlier this year in  January and attended TTT for her first time in 2015.

Catherine and Larry live on Sebago Lake in ME and the day was picture perfect. Scores of people were there and in the house, large photographs of Catherine as a young girl, young mother, and well you get it - through all her stages of life -were on display.

The food and large gathering were a tribute to Catherine's and her family's generosity of spirit.

Here are two photos I thought folks might like. The first is Catherine with her daughter Leah and the second is a tiny portion of what was offered for dessert - but check out the sneakers and the color of those cupcakes :) 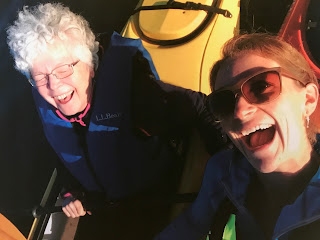 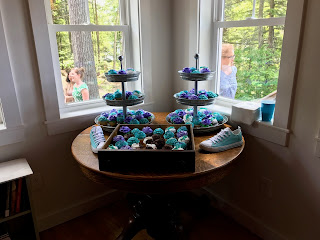 May Catherine's memory be a blessing...

Scientists learning that gut bacteria plays a role in chemo

This article appeared in Nature.com


Gut Bacteria and Its Role in Chemo...

In the quest for personalized therapies, most research has focused on how an individual’s genome controls their body’s responses to drugs. However, there is increasing evidence that a person’s unique microbiome — the population of bacteria and other microbes that live in their body — can be key to determining whether or not a drug works for their condition.
Researchers now have evidence that healthy people metabolize some drugs in different ways depending on their microbial make-up. They presented their data on 4 June at the meeting of the American Society for Microbiology in New Orleans, Louisiana.
Bacteria living in the human body will eat any nutrient that comes their way, whether it’s food from the host’s diet or a drug that the person is taking. But this dietary flexibility can become problematic if the microbes metabolize a drug into useless or toxic compounds.
Computational biologist Leah Guthrie at the Albert Einstein College of Medicine in New York City discussed data on a chemotherapy drug called irinotecan, which causes severe diarrhoea in some patients. Previous research in mice found that bacterial enzymes called β-glucuronidases can modify the chemical structure of irinotecan and other drugs (B. D. Wallace  et al. Science 330, 831–835; 2010). Normally, the liver detoxifies these treatments by adding a chemical group called glucuronidate. But the bacterial enzyme removes the group, turning the drug into a toxic compound.
Going with the gut
To see whether a person’s microbiome affected how they metabolized drugs, Guthrie and her colleagues collected faecal samples from 20 healthy people. They treated the samples with irinotecan, and measured the compounds produced by bacteria in the samples as they interacted with the drug. The team found that 4 of the samples contained high levels of the toxic form of irinotecan, but found no significant differences between the bacterial species present in any of the samples.
When the researchers analysed the proteins produced in the faecal samples, they found that those from people with high bacterial metabolisms contained strains that made more β-glucuronidases. These people also had increased levels of proteins that transport sugar into cells, which suggests they would be more likely to absorb the toxic compound and develop gastrointestinal problems.
The researchers are now planning to collect samples from people with cancer who are taking irinotecan, to see whether this is the case, says study leader Libusha Kelly, a microbiologist at the Albert Einstein College of Medicine.
It’s a nice step towards understanding how gut-bacterial enzymes interact with drugs, says Matthew Redinbo, a structural biologist at the University of North Carolina at Chapel Hill who also studies irinotecan. “Our biggest insight is to look at gut enzymes and think about them the same way as human” enzymes, he says.
Redinbo says that the liver processes many of the drugs given to patients using the chemical group removed by bacterial β-glucuronidases: this suggests that the microbiome’s effects could be very far-reaching. His work in mice has found that some β-glucuronidases make similar modifications to anti-inflammatory drugs that include ibuprofen, which can cause gut toxicity when administered over long periods of time (A. LoGuidice et al. J. Pharmacol. Exp. Ther. 341, 447–454; 2012).
Still a black box
Researchers have identified dozens of examples of gut bacteria that seem to modify therapeutic drugs, including some that treat Parkinson’s disease and anxiety, says Emily Balskus, a biochemist at Harvard University in Cambridge, Massachusetts. She says that bacterial interference could also help to explain why animal models don’t always predict drug toxicity in humans, because animals contain different microbes.
But many questions remain. Few of the enzymes responsible for breaking down these drugs have been identified, and it’s unclear how much gut bacteria vary among the human population.
A paper published on 2 June in Science, for instance, found that the HIV-prevention drug tenofovir, which is applied to the vagina as a gel, was ineffective in women whose vaginas contained a type of bacterium called Gardnerella (N. R. Klatt  et al. Science 356, 938–945; 2017). The bacteria quickly broke the drug down into an inactive compound, but the scientists don’t yet know how the process works, or whether it can be halted.
Eventually, Balskus says, clinicians may be able to screen people’s microbiomes to determine whether a drug will work for them. If their gut microbiomes seem problematic, doctors could prescribe an enzyme inhibitor or put them on a diet that provides the bacteria with an alternate food source. Studies using a dietary intervention in mice have shown some success in preventing gut bacteria from degrading a heart drug called digoxin (H. J. Haiser  et al. Science 341, 295–298; 2013).
Redinbo wants to try the technique in people. His start-up biotechnology company, Symberix in Durham, North Carolina, plans to apply for permission to start a clinical trial in which researchers will give cancer patients a β-glucuronidase inhibitor alongside irinotecan.
Still, it will be a long time before enough is known about bacteria–drug interactions for physicians to be able to prescribe such therapies routinely. “It’s staggeringly complex,” says Redinbo.
Posted by Margaret Mastrangelo, M.S., FNP at 2:29:00 PM No comments: