Thanks go out to Betsy for sending me this article from the NIH Director's Blog, written by Dr. Francis Collins:


Researchers continue to produce impressive miniature human tissues that resemble the structure of a range of human organs, including the livers, kidneys, hearts, and even the brain. In fact, some researchers are now building on this success to take the next big technological step: placing key components of several miniature organs on a chip at once.
These body-on-a-chip (BOC) devices place each tissue type in its own pea-sized chamber and connect them via fluid-filled microchannels into living, integrated biological systems on a laboratory plate. In the photo above,(NOT SHOWN), the BOC chip is filled with green fluid to make it easier to see the various chambers. For example, this easy-to-reconfigure system can make it possible to culture liver cells (chamber 1) along with two cancer cell lines (chambers 3, 5) and cardiac function chips (chambers 2, 4).
Researchers circulate blood-mimicking fluid through the chip, along with chemotherapy drugs. This allows them to test the agents’ potential to fight human cancer cells, while simultaneously gathering evidence for potential adverse effects on tissues placed in the other chambers.
This BOC comes from a team of NIH-supported researchers, including James Hickman and Christopher McAleer, Hesperos Inc., Orlando, FL. The two were challenged by their Swiss colleagues at Roche Pharmaceuticals to create a leukemia-on-a-chip model. The challenge was to see whether it was possible to reproduce on the chip the known effects and toxicities of diclofenac and imatinib in people.
As published in Science Translational Medicine, they more than met the challenge. The researchers showed as expected that imatinib did not harm liver cells [1]. But, when treated with diclofenac, liver cells on the chip were reduced in number by about 30 percent, an observation consistent with the drug’s known liver toxicity profile.
As a second and more challenging test, the researchers reconfigured the BOC by placing a multi-drug resistant vulva cancer cell line in one chamber and, in another, a breast cancer cell line that responded to drug treatment. To explore side effects, the system also incorporated a chamber with human liver cells and two others containing beating human heart cells, along with devices to measure the cells’ electrical and mechanical activity separately.
These studies showed that tamoxifen, commonly used to treat breast cancer, indeed killed a significant number of the breast cancer cells on the BOC. But, it only did so after liver cells on the chip processed the tamoxifen to produce its more active metabolite!
Meanwhile, tamoxifen alone didn’t affect the drug-resistant vulva cancer cells on the chip, whether or not liver cells were present. This type of cancer cell has previously been shown to pump the drug out through a specific channel. Studies on the chip showed that this form of drug resistance could be overcome by adding a second drug called verapamil, which blocks the channel.
Both tamoxifen alone and the combination treatment showed some off-target effects on heart cells. While the heart cells survived the treatment, they contracted more slowly and with less force. The encouraging news was that the heart cells bounced back from the tamoxifen-only treatment within three days. But when the drug-drug combination was tested, the cardiac cells did not recover their function during the same time period.
What makes advances like this especially important is that only 1 in 10 drug candidates entering human clinical trials ultimately receives approval from the Food and Drug Administration (FDA) [2]. Often, drug candidates fail because they prove toxic to the human brain, liver, kidneys, or other organs in ways that preclinical studies in animals didn’t predict.
As BOCs are put to work in testing new drug candidates and especially treatment combinations, the hope is that we can do a better job of predicting early on which chemical compounds will prove safe and effective in humans. For those drug candidates that are ultimately doomed, “failing early” is key to reducing drug development costs. By culturing an individual patient’s cells in the chambers, BOCs also may be used to help doctors select the best treatment option for that particular patient. The ultimate goal is to accelerate the translation of basic discoveries into clinical breakthroughs. For more information about tissue chips, take a look at NIH’s Tissue Chip for Drug Screening program.
References:
[1] Multi-organ system for the evaluation of efficacy and off-target toxicity of anticancer therapeutics. McAleer CW, Long CJ, Elbrecht D, Sasserath T, Bridges LR, Rumsey JW, Martin C, Schnepper M, Wang Y, Schuler F, Roth AB, Funk C, Shuler ML, Hickman JJ. Sci Transl Med. 2019 Jun 19;11(497).
[2] Clinical development success rates for investigational drugs. Hay M, Thomas DW, Craighead JL, Economides C, Rosenthal J. Nat Biotechnol. 2014 Jan;32(1):40-51
Posted by Margaret Mastrangelo, M.S., FNP at 10:12:00 AM 1 comment:

Don't forget to signup for the 13th Annual Learning for Living for September 14, 2019.

It's sponsored by Ovations for the Cure and the line up of topics will be of interest to many.

It's FREE and women are encouraged to bring a guest. Parking is at a discount and there's always a wonderful breakfast and lunch. There's a great line-up of speakers covering many topics.

Some of the topics will include the latest update on PARP inhibitors, misconceptions about clinical trials, a Q&A session and a session on hospital vs network based patient centered care for advanced ovarian cancer. To sign up, follow this link.
Posted by Margaret Mastrangelo, M.S., FNP at 9:06:00 AM No comments:

Free Event in Boston 9/18 on "Living with Ovarian Cancer" 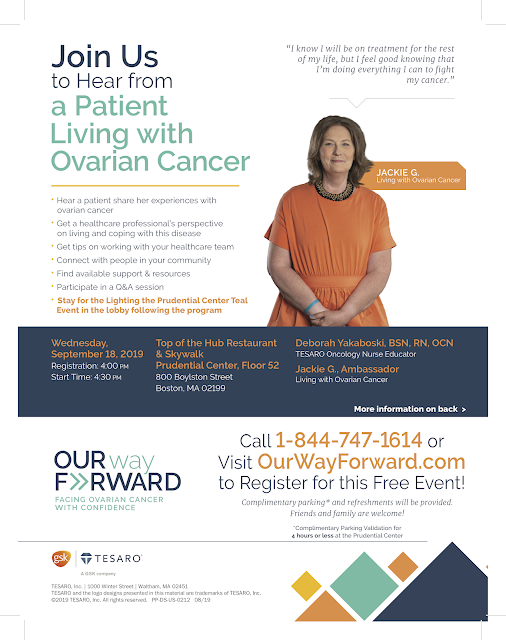 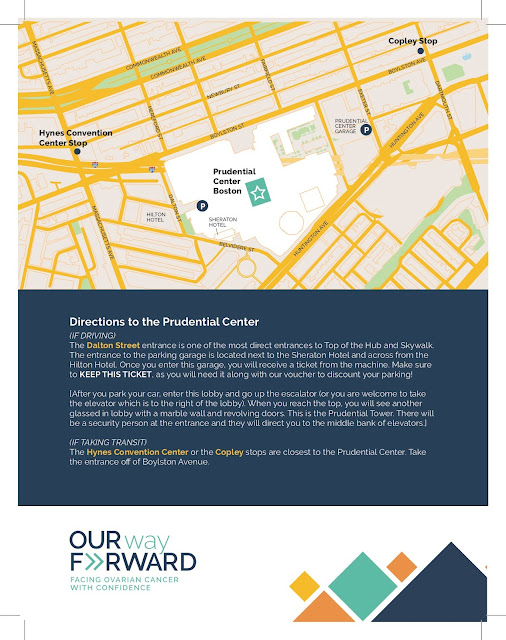